disSATisfied with the New SAT 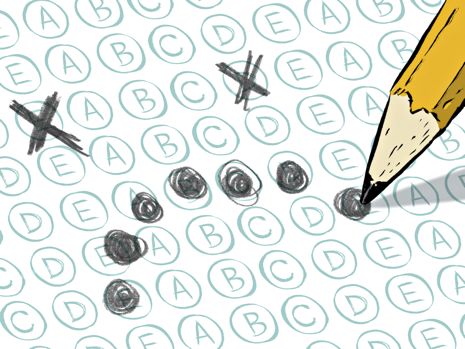 Issues with the New SAT

This New SAT is a mess, and we recommend you steer clear. Much has been written dissecting the specifics of the new SAT, so we’ll be brief on that topic. If you’d like to read in depth, take a look at these excellent articles from The New York Times, andThe Huffington Post. The following is a critique, and a justification for leaning into the ACT for the foreseeable future.

The New SAT is trying to multitask, and is falling short.

The test is shifting from a three-section (English, Math, Reading) format to a two-section format (Math, Evidence-Based Reading and Writing). But these titles are deceptive. Both Math and EBR&W will contain Science-esque passages involving data analyses. EBR&W will contain English/Grammar, Reading Comprehension and an Essay. Math will contain a calculator and non-calculator section. To be reductive, this test is going to run into the multi-tasking paradox: trying to do too much makes situations more prone to errors and substandard quality. Compare this to the ACT which has clearly delineated sections without overlap. Picture yourself as a student going through a reading section, then being broadsided with a scientific question regarding graphical analysis. A student’s inability to know what questions are being asked of him are going to make this test a murky endeavor.

The source material almost makes this test a non-standardized exam. Standardized tests, as a rule, cannot include material that is known in advance. The New SAT is drawing on texts from American history: arcane passages from Dr. King, written while in a jail cell, founders’ narratives, and the like. Though it’s unlikely that you will have read those specific passages, you may have. Furthermore, an in-depth history of the US will go a long way toward obviating the need to read those texts. That is, those who took AP US History will be unfairly advantaged versus their counterparts who took AP European history. This is not a standardized test, anymore.

The scoring and scaling have no baselines

What happens after your right and wrong answers are tallied? The output, your raw score, gets scaled both against a history of SAT data, and with regard to other test takers of your specific test. The old SAT used nearly 10 years of data to do this. The New SAT will use about 1 year’s worth of data. Where are they getting it? When students were taking the SAT over the past 18 months, they would see an experimental section that featured questions and formats from the New SAT–questions whose formats they had never before seen. The SAT will now use the students’ responses to those experimental questions as a baseline for New SAT test-takers. This would be acceptable except for the fact that 1) there is a paucity of data, and 2) students taking the experimental sections had no idea what they were doing. By way of analogy, it is as if we asked football players to try poll vaulting during half-time, and then we used their average scores to grade professional poll vaulters who had prepared specifically for that event. The scaling will be volatile at best, and inaccurate at worst, until the SAT indexes a statistically significant number of scores from students who prepared specifically for that test.

We need, here, to correct a specious statement going around the test-prep community. Fewer answer choices will not create an easier test. There are many articles extolling the benefits of the shift from five answer choices to four, and lauding the removal of the guessing penalty. Please note that neither of these things will produce higher scores. Remember these tests are standardized, meaning, among other things, the scores are judged relative to other test-takers. Because all test-takers now have four answer choices and no guessing penalty, the raw score will go up, but the scaled score will not. If you were in the 90th percentile before, you will remain in the 90th percentile, regardless of the fact that you went from answering 100 questions correctly to 105.

Stick with the ACT

The new SAT may turn out to be a better predictor of college success, and it may be a less-biased exam, but we will not know for years. In the meantime, we have a Frankensteinian construction with potentially inaccurate baselines, and uneven benefits for those with a knowledge of American history.

Find what you need

Be the first to hear about changes to test dates, the best strategies, and more:

How are our tutors held accountable?

This second layer of insight and experience is one of the many ways that Powerful Prep ensures the most personalized service and the strongest results for its students.

Be the first to hear about changes to test dates, the best strategies, and more: